Am I just not good enough?

We've all thought this at one time or another. Maybe it's after we've failed at something that was really important to us. Maybe it's every single day when we get out of bed. Thoughts have so much power in our lives. Our thoughts can compel us to adapt to a completely different way of living, or they can bring us down to such a low point where we don't even want to bother trying anymore. Thoughts can be dangerous, but they don't have to control us.

You're feelings of self-doubt and unworthiness probably stem from someone or something that made you think you weren't enough. But no matter what someone might have said or done to you, ultimately it's you who are choosing to doubt yourself. You are choosing to believe someone else's thoughts. You don't have to do that. You don't have to doubt yourself. Don't choose that. Despite what we think sometimes, we as humans have the ability to choose what we feel. Yes, things can happen to us that cause us to be influenced by our circumstances and seem to make us feel a certain way but really we are choosing to feel that. Even if it doesn't seem like you have a choice, you do my friend, you do. So don't choose to hate yourself. Don't choose doubt. I know it might sound like I'm making it way easier than it is, and the thing is it's not easy but it is simple. It's simply a choice. The process is hard, but the choice is simple.

B. At the same time, we live in a society where so many people are trying to be noticed and live so extravagantly out of the box that living extravagantly has become the new normal. When you look realistically, we really aren't that different from each other. We're all people. You don't have to be special to be good enough.

Ultimately what you think of yourself is up to you. 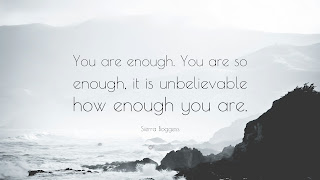 find me around the internet